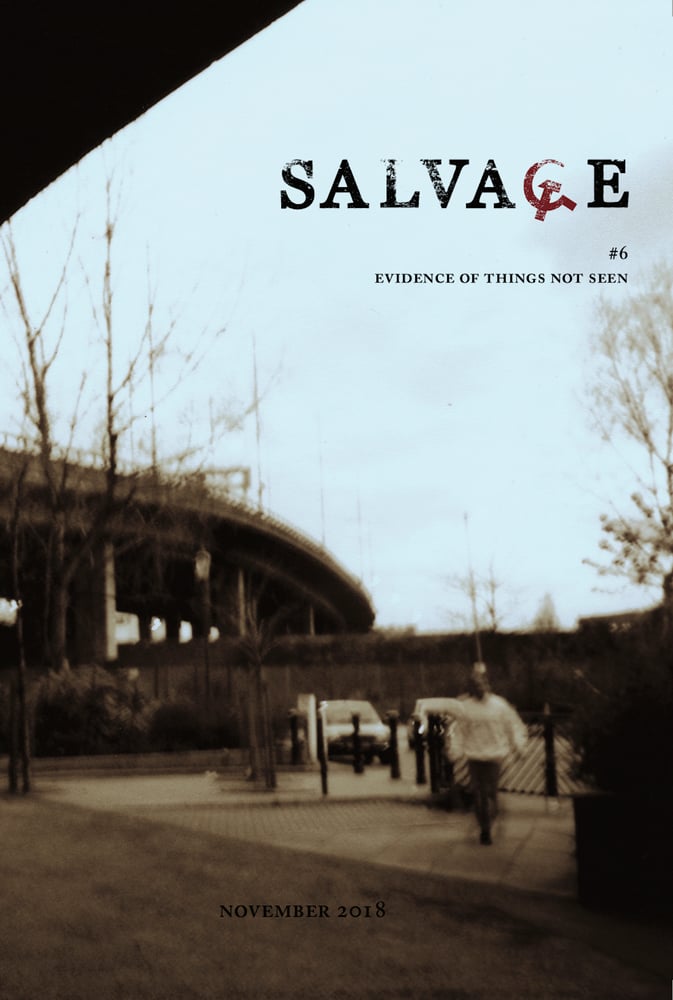 The sixth issue of Salvage.
**Free postage to UK**

Delivery usually takes a week in the UK, two weeks in Europe, and can take up to six weeks internationally.

Richard Seymour: 'Caedmon’s Dream: On the Politics of Style'
Politics and the English language – among others – redux. Bromides, ornamentaphobia and the elitism of ‘clarity’.

Robert Knox: 'Against Law-sterity'
Beyond economics and ideology to a jurisprudential horizon. The law of austerity and the austere grounds of law.

Barnaby Raine: 'Jewophobia'
Navigating sound, fury and fear, the bad faith and even good, in an unstable debate, striving for a theory worthy of the name.

China Miéville: 'Silence in Debris: Towards an Apophatic Marxism'
Put your finger to your lips. Epistemology, yearning and liberation beyond the limits of words.

Asad Haider: 'Eight Theses on Identity'
The universal, the particular, the reactionary and emancipatory in a category overused and under strain.

Alex Alvarez Taylor: 'The Left and Louis-Ferdinand Céline'
On the eloquence of an enemy, the politics of publishing, and radical reading beyond moralism and special pleading.

Sivamohan Valluvan and Malcolm James: 'Left Problems, Nationalism and the Crisis'
Towards a chronology of toxicity, of bad answers to good questions and the seduction of exclusion amid political decline.

Daniel Hartley: 'The Person, Historical Time and the Universalisation of Capital'
History and histories, universality and particularities in the overdetermined person, subaltern and/or otherwise, itself.

Yvan Najiels: 'The Demise of the International Proletariat of France: Talbot as Political Turning Point'
Strike-making, strike-breaking, the rise of race and racism in the Republic and the perfidy of the so-called Left.

Joe Hayns and Selim Nadi: Interview with Selim Nadi of the Parti des Indigènes de la République
‘Not outside, but against’. Testimony from and of the vilified and unvanquished.